Social media is an integral part of our day-to-day lives. Wherever you look, somebody is glued to theirphone checking the latest video from Lad Bible on Facebook, seeing what hot topic is trending on Twitter or going through the latest Instagram filters.

Since the emergence of Facebook and Twitter 12 and 10 year’s ago respectively, Creatives have managed to build massive followings and turn those followers into a shed load of money by engaging people online and turning them into customers.

Despite many big businesses vast team of ‘experts’ managing their social media platforms, they can still be prone to making blunders, leading to the wrath of huge amounts of people waiting to troll the living hell out of them.

With the new year now here we thought what better way to begin 2016 than to laugh at some of the funniest social media blunders by brands of the last 12 months.

To celebrate it’s 20th birthday last year, Amazon launched a sale day that they said would be bigger than Black Friday with double the amount of deals. In reality the sale was completely underwhelming and led to a rise in negative tweets by 241%. 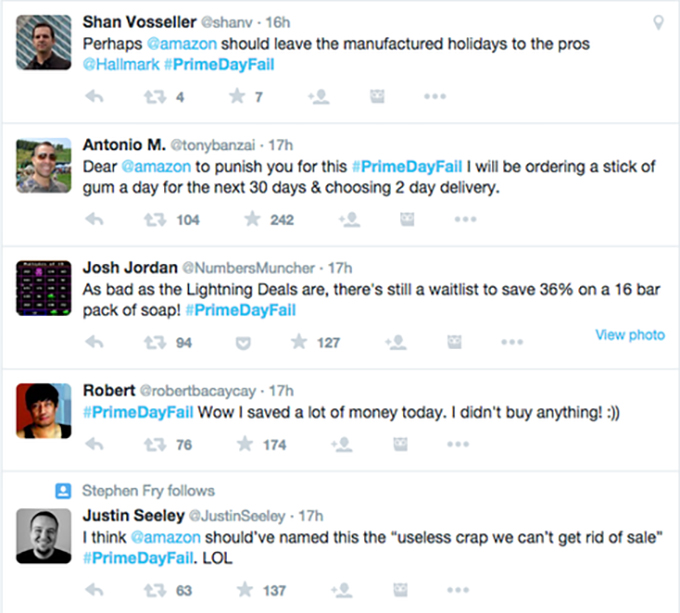 Although this isn’t a complete fail for Amazon, as they did manage to generate some good sales figures and shifted a lot of old stock the hashtag #PrimeDay became hijacked by trollers pointing out the vastly unimpressive deals that Amazon were offering.

To try and take some of the noise away from Uber and it’s meteoric rise, Australian cab firm Victorian Taxi Association decide to engage Twitter users using the hashtag #YourTaxis.

The aim was to get previous customers to tweet and engage with the company using the hashtag and open up a discussion about the brand.

However this backfired rather quickly when the hashtag was instead used to highlight numerous negative experiences with the taxi firm. Allegations such as sexual abuse, racism, assault and harassment were used to describe people’s experiences, leading Victorian Taxi Association to come out and state that this was the intention all along; to gain feedback to improve it’s service.

In another astonishingly bad piece of judgment, the same taxi firm got caught up in another social media scandal in 2015. During Remembrance Day, the firm decided to use the hashtag #RemeberanceDay (this is not a typo by the way) in a bid to promote the brand. Unsurprisingly, once the Twittersphere got wind of this, people upset and offended relentlessly trolled the firm until they were forced to apologise.

Oh and to make matters worse they spelt Remembrance Day wrong in their hashtag.

Earlier this year the controversial but hugely successful book, Fifty Shades of Grey had its theatrical release. It went on to become on of the biggest selling films of the year. Also in 2015, EL James decided to re-write Fifty Shades of Grey from the male protagonists point of view... clearly for the literary value and nothing to do with making as much money as possible of course.

The hashtag #AskELJames was set up and as with many Twitter Q&A's it got hijacked by literally thousands of Twitter users who took over the Q&A to ask about anything from the misogynistic tone of the book all the way to it's almost chilldlike style of writing.

Rewind to a few years ago and ketchup extraordinaire Heinz launched a competition getting consumers to re-design the label of their famous baked bean bottle. In return, the winner would have their design used as the products label and be paid for the privilege.

The man in question took it all well and in his stride posting to Heinz Facebook page: “Your Ketchup is probably not for minors.”